Lavery Library Special Collections seeks to collect, preserve, arrange and provide access to the rare and unique materials housed in the collection in order to promote the use of these materials by the Fisher community, scholars, and the public.

The "Book of Kells" is a Latin version of the New Testament, transcribed by Irish monks over 1,000 years ago. The original of the ancient manuscript, "The Book of Kells," is permanently housed in the library at Trinity College, Dublin, Ireland. The facsimile at Lavery Library is Number 765 of a limited edition of 1,480 books worldwide. It was purchased in 1991 as a gift to Fisher and the Rochester Community by Irish immigrants, Irish-American descendants, friends, and members of the Monroe County Chapter of the Ancient Order of Hibernians and the Ladies Auxiliary.

Lavery Library is fortunate to have original copies of 147 of these enormously influential newspapers. The most important piece of this collection is the February 22, 1850 issue of The North Star. Douglass incorporated an intricate drawing of a slave running to the North Star in the masthead. Research has revealed that Lavery Library possesses one of the few known print copies of this special edition in the world.

The following newspapers have been digitized and are viewable on New York Heritage: 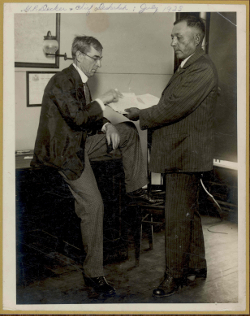 George P. Decker (1861-1936) was a Rochester attorney active in Native American land claim cases. The "Decker Papers" collection contains documents written by Decker, legal transcripts and petitions, letters and other materials. During the three-decade span of his professional career, Decker represented the Onondaga, Tonawanda, Cattaraugus, and Allegany Reservations. He also was involved in representing land claims by the Senecas and Cayugas in New York and Canada. Decker’s correspondence with Chief Deskaheh, Speaker of the Six Nations Council, concerns the League of Nations and the sovereign rights of indigenous peoples.

The following newspapers have been digitized and are viewable on New York Heritage:

This collection measures 31.85 cubic feet and documents the activities of Theodore C. Cazeau and his involvement with the Grand Army of the Republic (GAR) and later, the Sons of Union Veterans organizations, for which he was elected national commander-in-chief in 1929. The collection, which spans the years 1863 to 1935, includes correspondence, photographic material, printed material, manuscripts, clippings, textiles, and artifacts.

The Rochester Radio History Collection, contains historic equipment, photographs, and documents specific to the radio broadcasting industry in Rochester, New York, with a special emphasis on WHAM history and personalities. In addition to books and documents, audio is available of interviews with people in the areas of radio production, management, and on-air personalities. Audio is also available of radio shows and broadcasts.

Subject Librarians
Who's my Librarian?