Majors and alumni from the Department of Media and Communication highly recommend both their program and the overall Fisher experience.

John Devoe came to Fisher in 2017 after beginning his academic career at University of Rochester, and has since become deeply involved in Fisher’s theater and professional communities. He serves on the executive board of the Fisher Players, hosts his own game show on Cardinal Television, and works as a student ambassador leading campus tours.

John found his niche in the media and communication program after exploring several different majors and plans to pursue a career as a television writer, director, or producer. He enjoys the combination of technical and creative skills in his field, and says of his Fisher education, “There’s nowhere else you can get a deep understanding for how the technology works, learn to use and operate all of it, and still let your creativity shine through.”

His favorite thing about Fisher is the inclusive and supportive Fisher family he discovered during his first year. He recommends new students get involved on campus to meet people and make connections, emphasizing that “there’s a place in the Fisher family for everyone.”

If you wandered into the Donald E. Bain Campus Center Mainstage late at night, you’d likely to bump into Yamiles Espinal ’17, who says the Mainstage was her favorite spot on campus to study quietly, yet still socialize with people around her. But you’d also see the media and communication and criminology double major in Growney Stadium playing a strong side wing for the women’s rugby team, in Lavery Library mentoring younger students enrolled in the Higher Education Opportunity Program, or in Cleary Auditorium dancing side-by-side with fellow members of the Arts in Motion club.

You could say that Yamiles, a native of Bronx, New York, followed closely the advice she would give to first-year students.

“My advice for incoming freshmen is to stay on campus. It will be difficult to make friends if every weekend you are going home, plus where is the fun if you are not building friendships?” she said. “The four years goes by very quickly and that is time you will never be able to get back.”

Her four years have flown by. In addition to the television studio production courses she took at Fisher, she served as a manager for Cardinal Television, learning everything it takes to produce a show.

“I am a person that enjoys hands on activities and learning, and the communication department allows me to do that,” Yamiles said. “I also enjoy helping people, and by gaining knowledge through my criminology major, I can do that.”

Yamiles also studied abroad in Athens, Greece, spending three months interacting with war refugees living in the country. The experience allowed her to study both of her majors. She hopes to pursue a career in law enforcement, but also has her eyes on a career in television, perhaps working on a television production team at Univision. 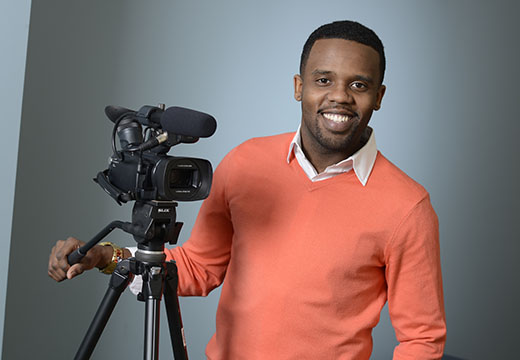 Media and communication graduate LaQuan Hounshell transferred to Fisher after spending two years at Monroe Community College. One of his professors at MCC recommended Fisher, and after a positive visit to campus, he was sold.

LaQuan quickly discovered and took advantage of the many extracurricular activities on campus. He became involved in Cardinal Television, Cardinal Courier, and Fisher Cru—organizations he credits for "lasting personal and professional connections and friendships." His involvement made him feel as if he had been at Fisher all along.

While at Fisher, LaQuan also interned at a local television news station.

His favorite thing about Fisher was the community and how helpful and supportive everyone was. He says his transition from MCC was seamless because he received a lot of help from people who made sure he had what he needed to succeed.

Media management major Alexandra Hristodoulou says that being active on campus has a snow ball effect, leading students from one opportunity to the next.

Her path from freshman to senior included membership in Fisher’s chapter of the Public Relations Student Society of America and the student-run ad agency, The PRIMA Group. Alexandra also spent one winter break in London, England through a trip coordinated by Fisher’s Resident Scholar in Media Tom Proietti, gaining an international perspective on media and culture.

The thing she liked most about studying media management?

“It’s an integrated blend of public relations, marketing, advertising, and communications,” the Webster, New York native explained. “In an era when the industry is rapidly altering through technology and media, the media management program lays a strong foundation of relevant business, media, and marketing fundamentals, while simultaneously emphasizing innovative and creative thinking that prepared us for a diverse array of career opportunities.”

During the summer before her senior year, Alexandra translated her coursework and student organization experience into a summer internship with Rochester-based media buying agency Butler/Till.

Alexandra was offered employment at Dixon Schwabl, a full-service advertising and public relations firm based in Victor, New York, and transitioned into a full-time member of the agency’s account team after graduation.

Kennedy, New York native Alex Ormond '17 is a graduate of the media management program. As a freshman, she immediately embraced Fisher's diverse choices of clubs and got involved by joining the Marketing Club, PRIMA (a student-run public relations/advertising firm), and Dance Club.

Alex's favorite course was Media Management and Economics because she was able to study the management and innovation behind technology she uses every day. She is excited about taking classes that challenge her to think about innovative solutions to problems in the technology industry. In addition to her major, Alex also pursued a minor in English.

She was attracted to Fisher for its smaller size and location, and she loves the wonderful sense of community on campus. "When they say the 'Fisher family,' they mean it! My roommates all became my best friends almost instantly."

Her one piece of advice to prospective students is to get involved and take advantage of every opportunity Fisher offers.

“Don't be afraid to try anything that interests you, ask questions, introduce yourself first, and challenge yourself to grow - through responsibility, communication, friendship, decisions, and opportunities.” That’s the advice that Claire Sauter ’18 has for first-year students.

The media management major has embraced opportunities for community service and co-curricular activities at Fisher. Outside of the classroom, the Wanakena, New York native is a Service Scholar who volunteers in the Rochester City School District and is a member of Students Who Advocate Volunteering and the Teddi Dance for Love.

Claire put her writing and research skills to use as a part of the College’s inaugural Peer Colleague Program, serving as a writing mentor for first-year students in a composition course. And, she enhances the public relations coursework she does through membership in the College’s chapter of the Public Relations Student Society of America and The PRIMA Group, Fisher’s student-run advertising agency. It all adds up to an experience that Claire said is preparing her for life after Fisher.

“I appreciate the openness that my major and minor afford students. From marketing and advertising to public relations and broadcast, the media management major, coupled with ethics, is a degree path that lets me learn and experience a variety of skills and potential careers to narrow down what fits best for my interests,” she said. “It's meeting people, understanding audiences, being creative, and doing the right thing all at the same time.”