In this section
Home » About » History

The seeds of what would become St. John Fisher University started growing in the hearts and minds of two great men: the Most Reverend James E. Kearney, then Bishop of Rochester, New York; and Reverend Hugh Haffey, CSB, a Basilian priest from Toronto who taught at Aquinas Institute, a local Catholic high school for boys.

Students would be guided by the educational philosophy of the Basilian Fathers and their motto, "Teach me goodness, discipline, and knowledge." Thus the idea of an institution of higher education bearing the name of St. John Fisher was born. 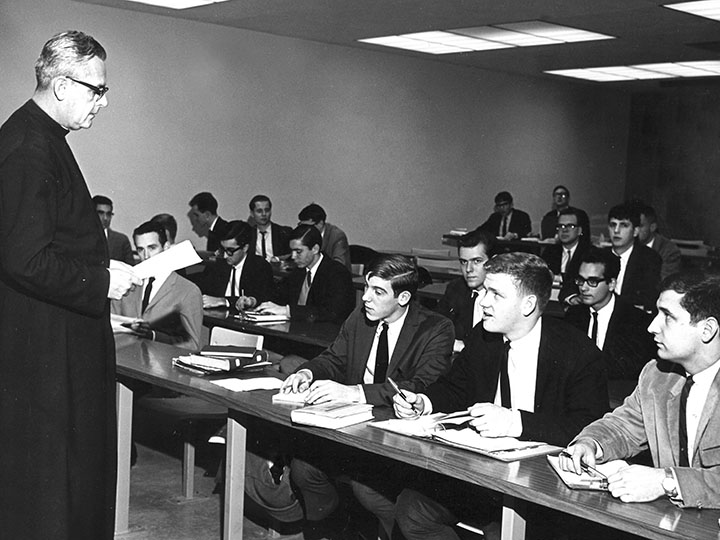 St. John Fisher College opened its doors in 1951 with 10 faculty members and 11 majors.

Fundraising for the new college began in 1947, as did the search for a site on which to build it. The Basilian Fathers purchased 70 acres on the College’s present site, at the juncture of Fairport Road and East Avenue. In 1951, the young men in the Pioneer Class of 1955 began attending classes.

At the time, there were 10 faculty members, and the students could choose from 11 majors. In the beginning, the campus featured just one building—the Administration Building, later rechristened Kearney Hall. A two-story wing, housing an auditorium and a cafeteria, was added in 1954. Five years later, a chemistry building opened on campus. 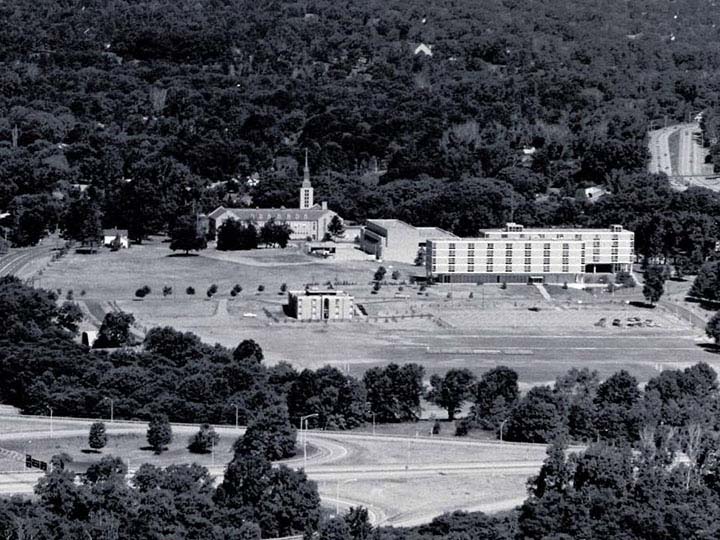 The 1960s saw increased enrollment and the construction of a number of new buildings including Ward Hall, the College's first residence hall.

By 1960, enrollment had quintupled. Students, taught by 30 full-time faculty, could choose from 14 majors. As enrollment increased, so did the size of the campus. In 1963, the College purchased 55 acres across Fairport Road from the main campus in an area known as Druid Hills. That same year, the College’s first dormitory, Ward Hall, opened, and construction started on an athletic center (since rededicated as the Manning and Napier Varsity Gym). Basketball Hall of Famer Bobby Wanzer was named the College's first full-time athletic director.

The campus landscape changed even more over the course of the decade, with the addition of the Basilian House of Studies (now Michaelhouse), Basil Hall, Murray Hall, and the Science Building. Another hallmark occurred in 1968, when Fisher became independent. 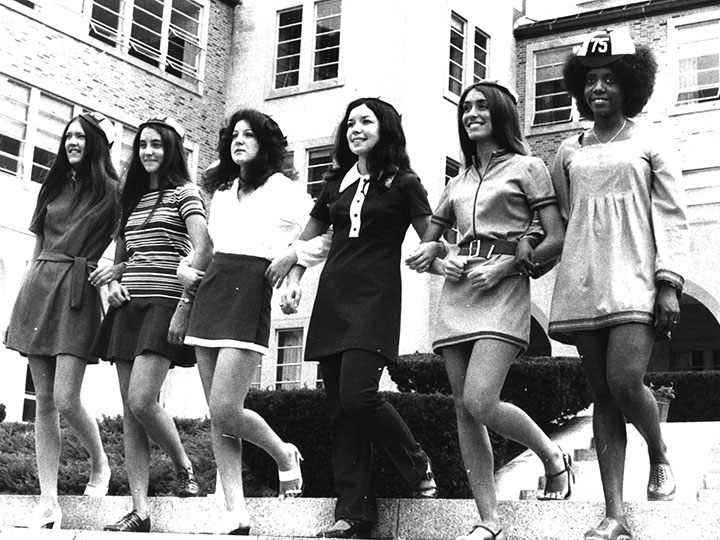 Originally conceived as a college for young men, Fisher became co-educational in 1971.

The dawn of the '70s saw the originally conceived young men's college open its doors to its first female undergraduates; Murray Hall was established as a women's residence hall in 1972. Other construction around this time included the opening and dedication of Lavery Library and an expansion of the chemistry building, which was renamed Pioch Hall.

In the 1980s, the major-offerings count had jumped to 25, while the number of faculty had increased to 85. Fisher’s charter was changed to accommodate the granting of graduate degrees in 1983.

On the building-and-grounds front, Fisher converted Becket Hall on the former Druid Hills property to student housing, naming it Murphy Hall in honor of the College's first president. From 1967 to 1981, Becket Hall had been a residence for students preparing for major seminary studies leading to priesthood in the Diocese of Rochester, as well as other dioceses in New York. 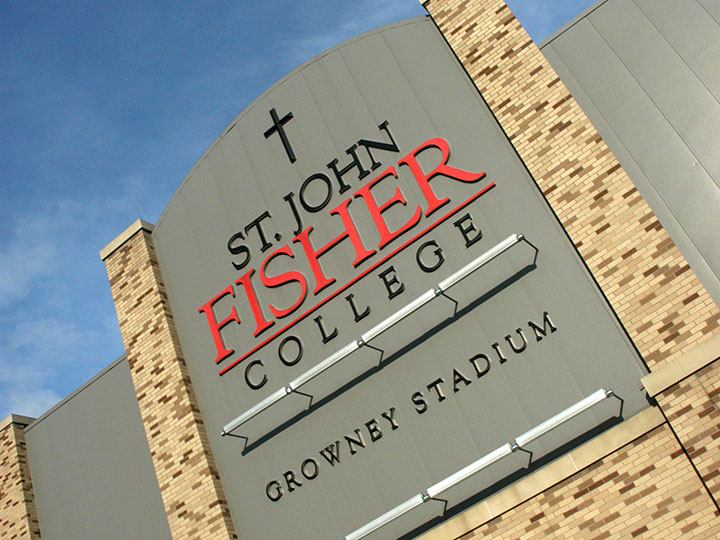 The 1990s saw the debuts of Fisher’s nursing program and the School of Adult and Graduate Education (SAGE). Coinciding with the College’s 50th anniversary charter celebration, a multimillion-dollar campus renewal project was begun in 1998. This allowed Fisher to purchase more land for building; upgrade academic buildings and classrooms with the latest technology and equipment; and renovate the athletic complex, including the addition of Growney Stadium. The NFL's Buffalo Bills football team made good use of the new stadium as the team relocated its spring training camp from SUNY Fredonia to Fisher, starting in 2000. 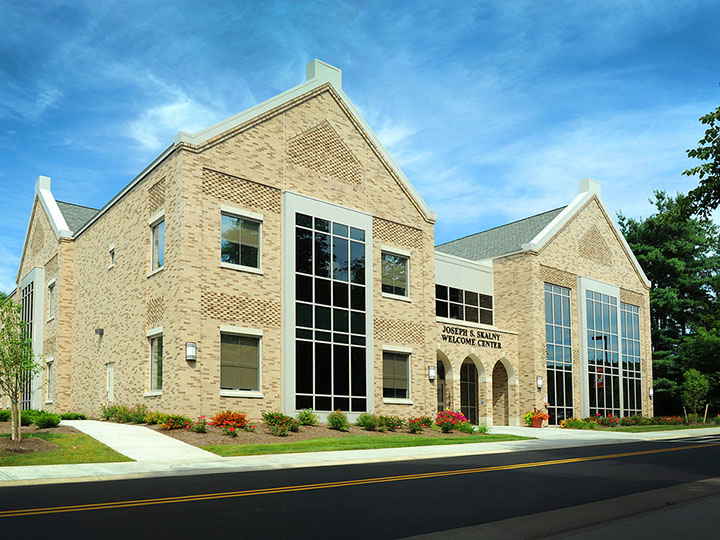 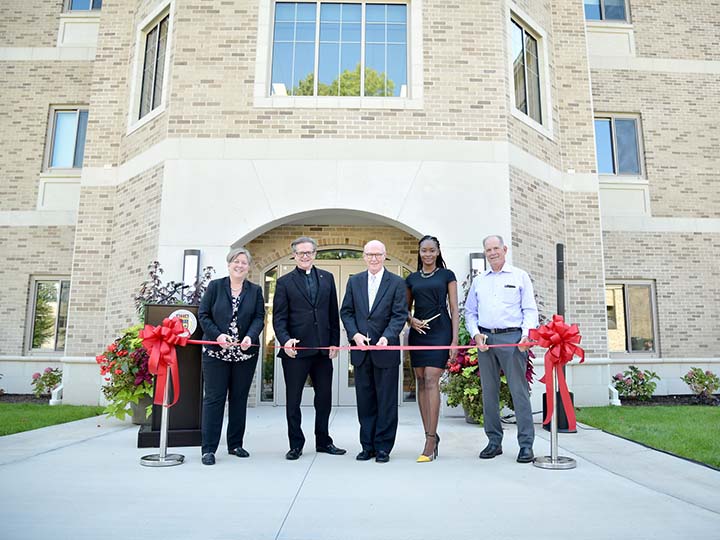 Members of the Fisher Community gather for the ribbon cutting of the Upper Quad Residence Hall.

Through innovative teaching practices and academic program growth, Fisher was reclassified in 2010 by the Carnegie Foundation for the Advancement of Teaching from a Master’s Institution to a Doctoral/Research University Institution (now known as a Doctoral/Professional University).

Victor E. Salerno ’66 gave a $2 million gift to the College, the largest gift it had ever received from an alumnus, for the Victor E. Salerno Center for American Enterprise which opened its doors to house the School of Business in 2013. Elsewhere on campus, ground was broken on the Polisseni Track and Field Complex.

Aligned with its culture of service, Fisher received the distinguished Carnegie Classification for Community Engagement in 2015. The Integrated Science and Health Sciences Building opened the same year.

Over the next few years, additional buildings established on campus signified further growth and development. The Hermance Family Chapel of St. Basil the Great was built as the center for spiritual life on the main axis of campus. The Upper Quad Residence Hall was built in 2019 to house upperclass students. 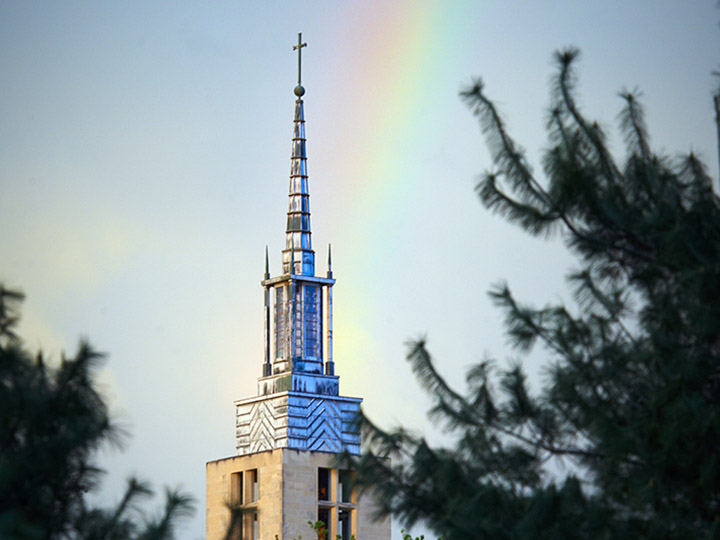 On June 20, 2022, President Rooney announced that Fisher would become in name what it has been in practice for more than a decade: St. John Fisher University. This historic announcement took place on the 73rd anniversary of the institution’s groundbreaking ceremony for the construction of Kearney Hall, Fisher’s original building.

Adding to a rich history of institutional achievements and accomplishments, the new name—St. John Fisher University—became official on July 1, 2022.

St. John Fisher University was born out of a desire to provide students with a traditional education in the humanities, social sciences, natural sciences, and business. Today, the University continues to emphasize liberal learning for students in both traditional academic disciplines and in more directly career-oriented fields. Fisher now offers nearly 40 majors; 11 pre-professional programs; and 13 master’s and doctoral programs. Enrollment exceeds 3,600 students at three degree levels.

Beyond academics, Fisher strives to develop the whole person—to teach young adults to be successful members of society, provide for themselves, look for ways to help in their communities, and enrich the world in which they live. Qualified students, faculty, and staff are welcomed into the Fisher family regardless of religious or cultural background.