In this section
Home » About » History » Life of Saint John Fisher

The Life of Saint John Fisher

John Fisher was born in Beverly, a town in northeast England, in 1469. His family was financially secure so he had access to a good education in preparation for his undergraduate degree at Cambridge University.

He joined the student body at Cambridge in 1483 at the age of 14 to earn, in rapid succession, his Bachelor and Master of Arts degrees that demonstrated his mastery of philosophy, grammar, literature, geometry, music, and astronomy.

As a resident of Michael House, and later as one of its masters, he found a home to read and study in preparation for his doctoral degree in theology, which he earned in 1501. Before earning this degree that crowned his academic studies, John Fisher was ordained a priest at the early age of 22.

Chancellor at Cambridge and Bishop of Rochester

Elected as its Chancellor in 1504, Fisher was committed to make Cambridge academically stronger, thus prompting him to seek the financial assistance of Lady Margaret to establish and endow Saint John’s College as well as refurbish Christ’s College including Michael House. Lady Margaret appointed Fisher to be the tutor of her grandson, who would be crowned King Henry VIII in 1509. 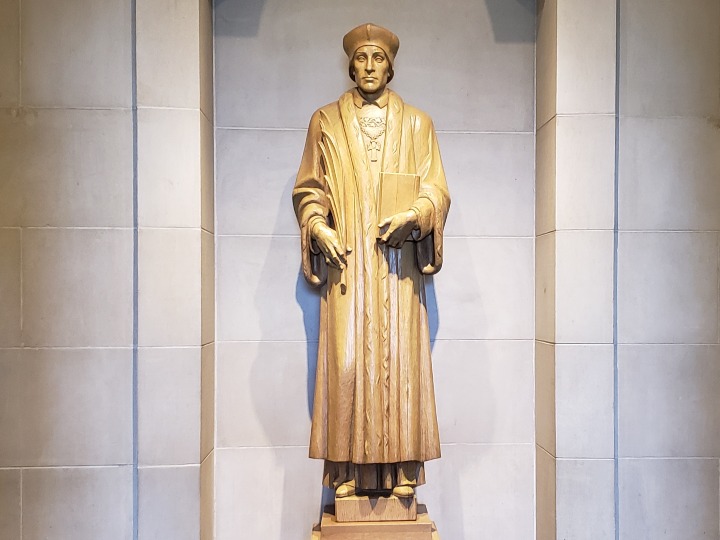 Fisher desired to provide England with the best of theology and a better educated laity. At that time, the Sunday sermon was the accepted method to educate the laity in matters of faith and morals. As Chancellor, he sought to provide an educated clergy to preach more effectively and model what they preached. He was aware of the ignorance and immorality of some of the preachers on the Continent who were sparking a theological revolution that demanded a reasoned reply.

Fisher realized that the preacher’s lack of a good education, his possible questionable lifestyle, or his misuse of the purpose of preaching would damage the life of the church. He chose education to form worthy preachers.

As the Chancellor at Cambridge and Bishop of Rochester (England), Fisher would himself continuously read, study, and reflect. He wrote books of polemical theology, as well as devotional tracts, which influenced the religious debates even on the Continent. Many judged him as one of the greatest theologians of the time.

As the Shepherd of souls in his own poor diocese, his lifestyle was most simple. He provided warm hospitality for travelers on their way to or from London. Even if the visitors were at odds with their host theologically, they would find an open mind and a gentle heart. This tireless Shepherd’s ministry to the poor and hungry was exceptional. The food at his table was simple so that more food could be given to those who had less. He sent blankets from his own bed to families suffering from the cold. Parishioners who were sick and dying knew their Bishop would sit with them long into the night to comfort and support them with his presence and prayers.

Bishop John Fisher did not recognize King Henry VIII’s claim to be supreme head of the Church in England, nor the validity of his marriage to Anne Boleyn. Henry judged Fisher a traitor and had him imprisoned in the Tower of London in April 1534.

Pope Paul III honored Fisher for his fidelity by making him a Cardinal, so Henry condemned Fisher to death. At 5:00 on Tuesday morning, June 22, 1535, the Lieutenant of the Tower of London awoke the sleeping Fisher to inform him he was to be put to death by decapitation before noon. 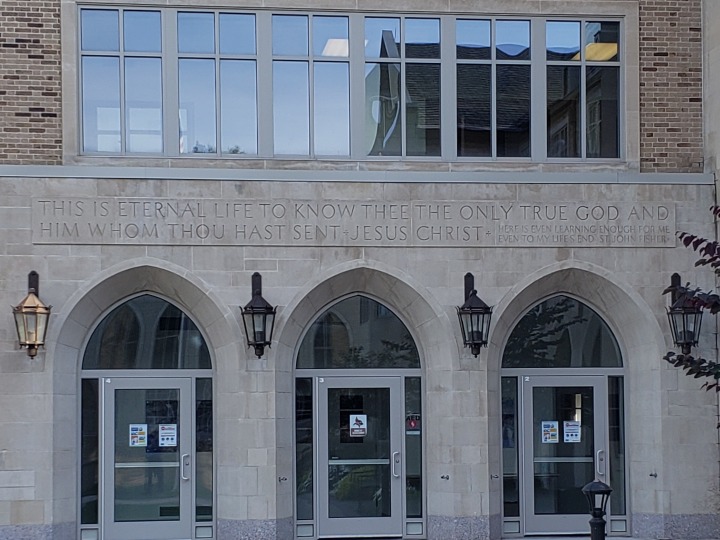 Half an hour before his execution, Cardinal John Fisher opened his bible for the last time and read from St. John’s Gospel, “This is eternal life: to know Thee, the only true God, and Him Whom Thou hast sent, Jesus Christ…” words now carved into the façade of Fisher’s original building, Kearney Hall.

Erasmus, a Renaissance scholar, humanist, and friend, described Fisher as “the one man at this time who is incomparable for uprightness of life, for learning, and for greatness of soul.”

A young bishop from Salt Lake City named James E. Kearney was in Rome at John Fisher’s canonization in 1935. Two years later, Kearney was named bishop of Rochester in America and named St. John Fisher the patron saint of our Diocese. 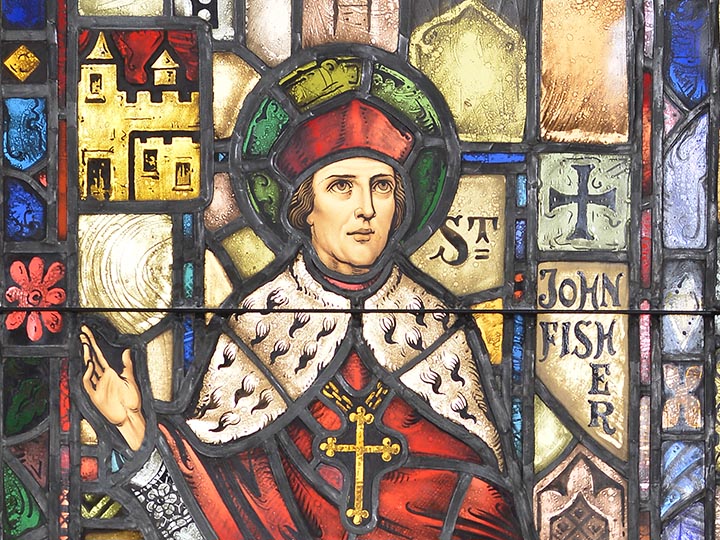 Bishop Kearney invited the Congregation of St. Basil (the Basilian Fathers) to found a college, and he gave it the name of the new diocesan patron. How appropriate, given that John Fisher was both a brilliant scholar and one who lived his life in service to the poor.

When Fr. Hugh Haffey, CSB, was fundraising for and organizing the new institution of higher education, he gave it the same motto as the Congregation of St. Basil, “Teach me goodness, discipline, and knowledge,” which is derived from Psalm 119. John Fisher had truly been a man who turned to the Lord to teach him goodness, discipline, and knowledge, and Fisher encourages its students to do the same.